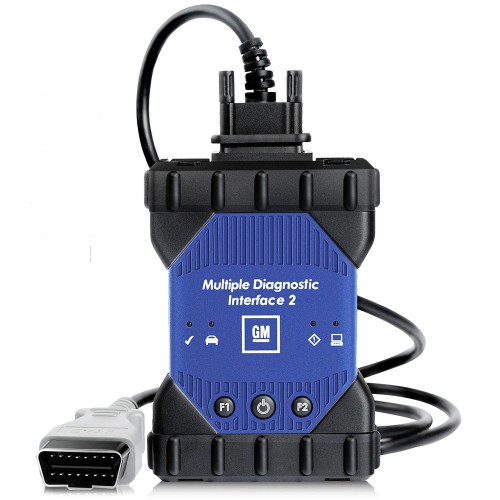 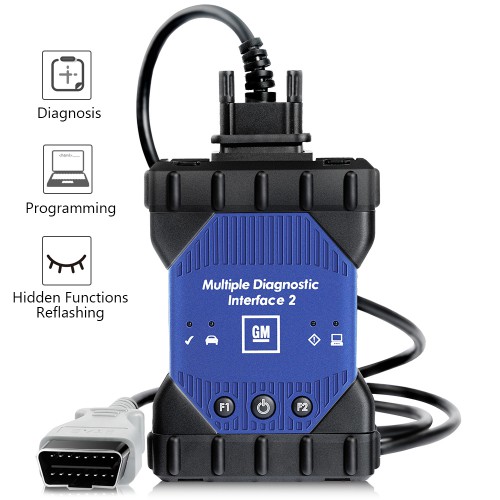 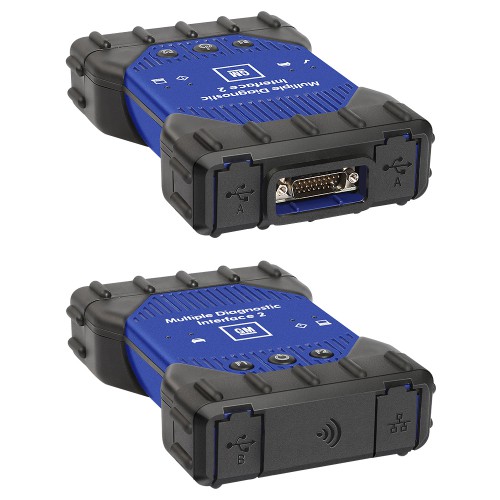 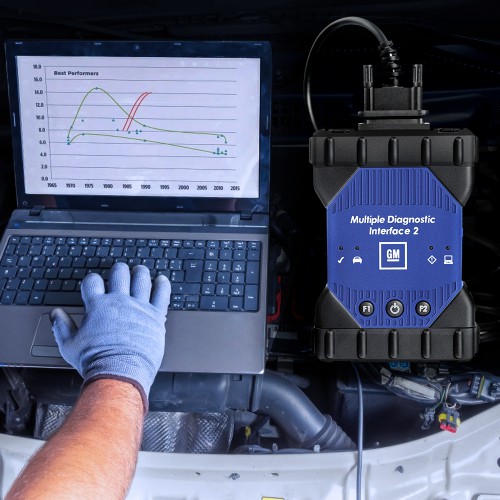 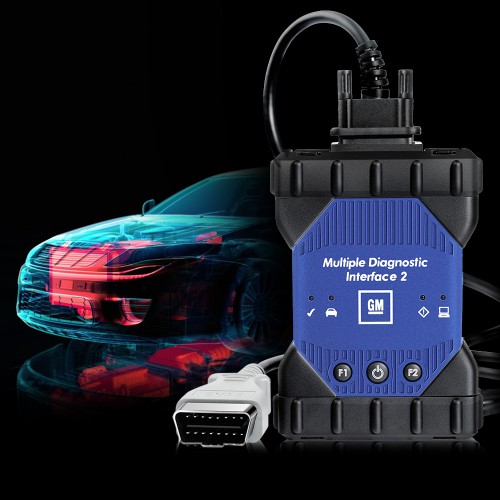 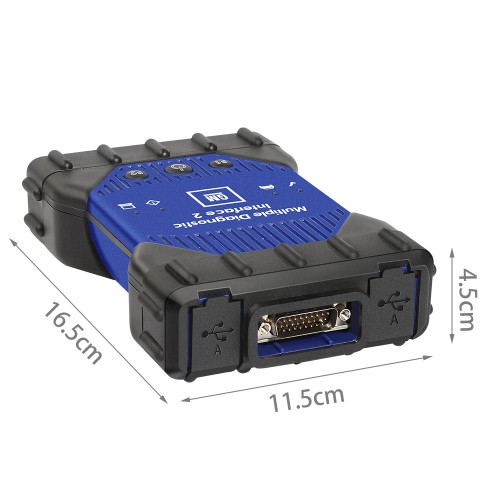 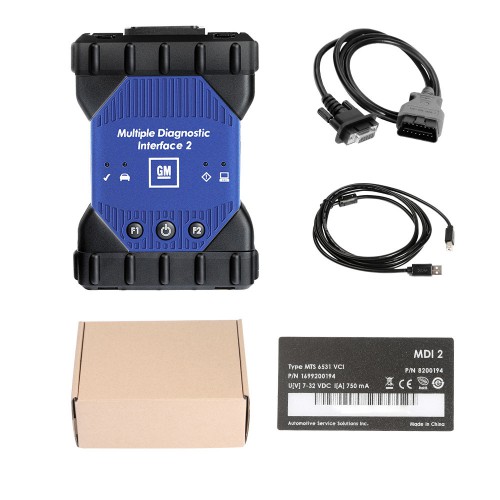 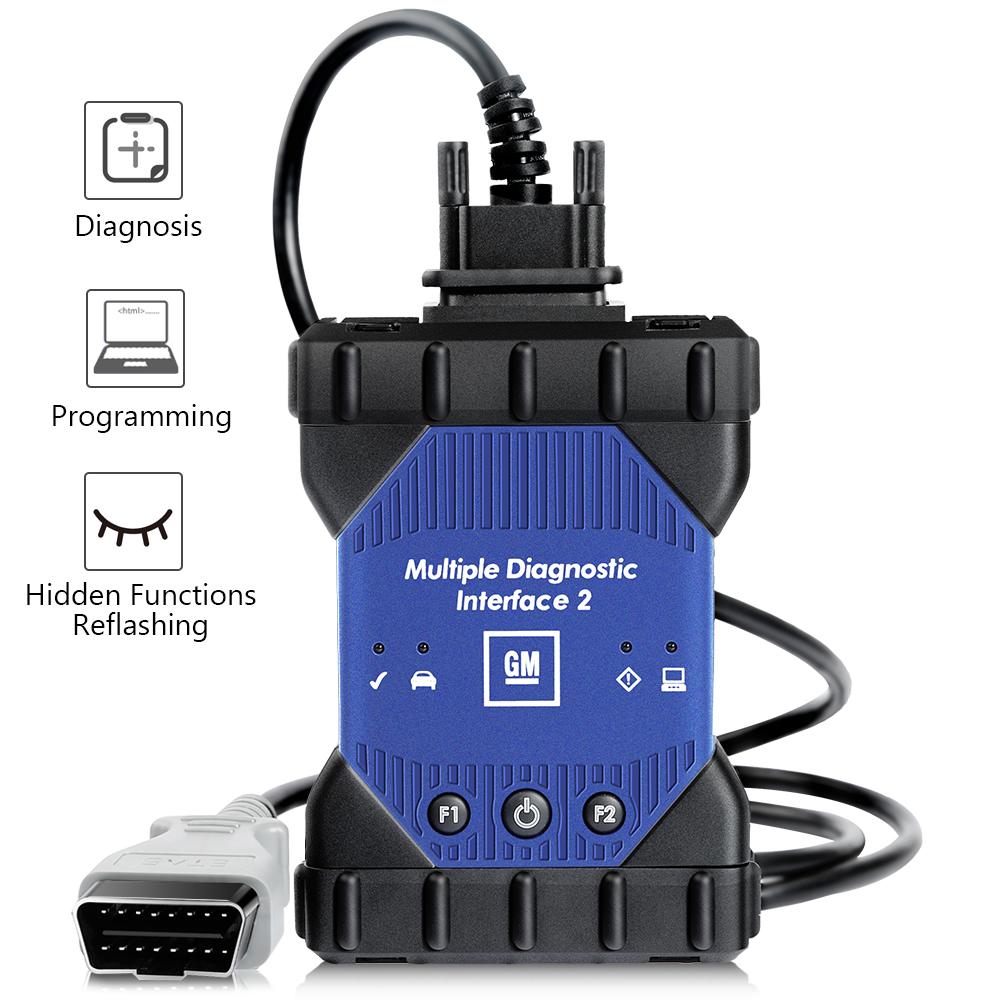 Similarities:
1. Both GM MDI2 and MDI are compatible with GDS2 Tech2Win
2. GM MDI2 shares the same functions and vehicle coverage as GM MDI.

FAQ For GM MDI 2 :
Q: My device just stopped working, it won't connect anymore It keeps flashing to red on the 3 light, then stays beeping loud 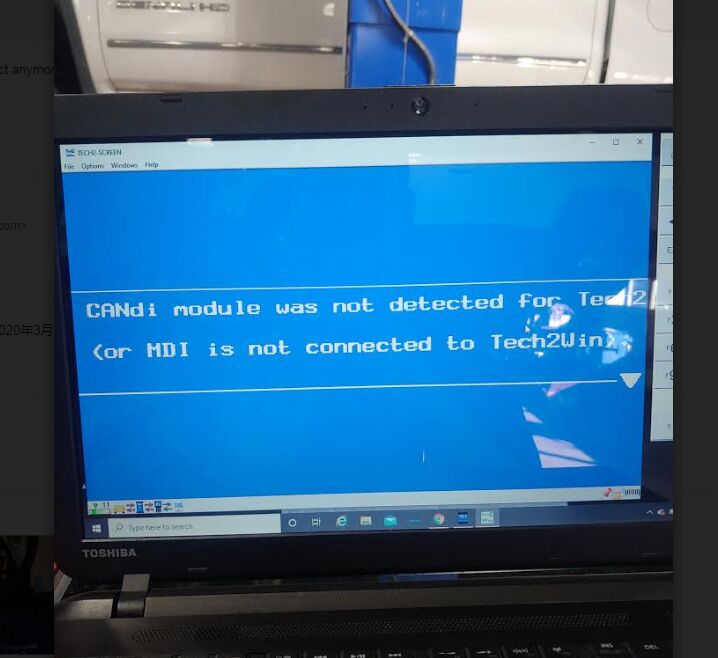 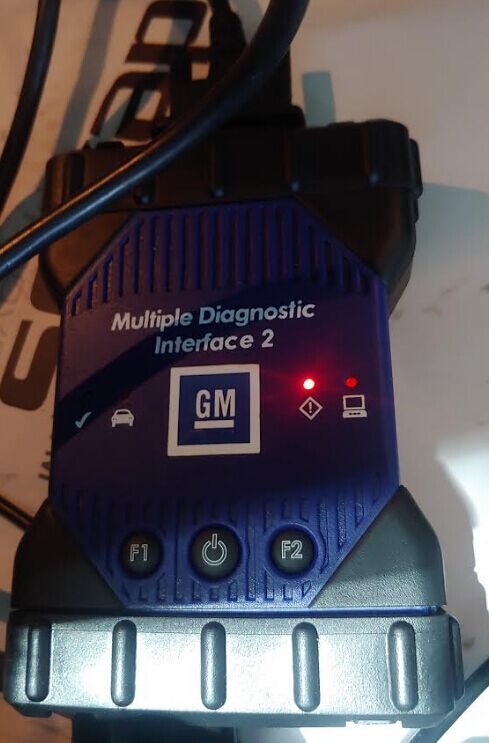 A:The technician suggest you to delete the device management and download a new one to replace it.
This is a download link : https://mega.nz/#!tFxhBYCD!agbcrCKJL5PRNiNNEw6Vj7JnsWz0F3ekuChliyeZpRs

3: wifi not working but works well with USB
I bought a cheap one and it only worked with usb. The wired network and wifi did not work. In fact, the card flash socket was missing from the board. Build quality was not to bad. I just use it to flash newer pcm/ecm's.

GM MDI 2 Description:
The Multiple Diagnostic Interface 2 (MDI 2) is used by professional technicians as an aid in diagnosing and repairing automotive electrical and electronic systems.
The MDI 2 is designed to connect the vehicle to a host PC computer application, which then functions through the MDI 2 for data transfer and Electronic Control Unit (ECU) reprogramming.

The MDI 2 supports diagnostic applications: GDS 2, Data Bus Diagnostic Tool, and Tech2Win. It also supports Pass-Thru programming applications: TIS2Web–SPS.
It replaces the first generation MDI, introduced in 2007, for Pass-Thru programming on current GM models.  The MDI 2 is backward compatible, so it can be used to perform Pass-Thru programming
on all vehicles built since 1996 by means of the J1962 connector using a DLC cable.  Connection between the MDI 2 and the PC can be accomplished via standalone (USB) and the dealership network (CAT5).
GM MDI 2 Features:
● Uses a new, more secure Type B connector and Ground Offset Failure protection. A wired connection is recommended for longer programming events.
● The MDI 2 is powered from the vehicle battery via the DLC Cable. It may also be powered over USB to perform firmware updates only using a PC.
● Uses USB 2.0 for faster firmware downloads instead of a separate AC power supply.
● The DLC cable is twice as long as the previous cable and connects at the top, making it easier to use. The cable only connects to the MDI 2.
* Automatic vehicle recognition
* DTC reading and removal
* Complete list of live data streaming for all main ECU
* Recordable / playback of live data
* New software flash for existing ECU to fix drivability issues
* Programming and installation of new ECU (PCM, ABS, Instrument cluster, air bag, fuel pumps etc.,)
* Programming new keys
* Setting / removing speed limiters
* J2534 pass thru offering ECU re-flash and diagnostics for other vehicle manufacturers, when subscribed to their specified software
* More dealer specific functions 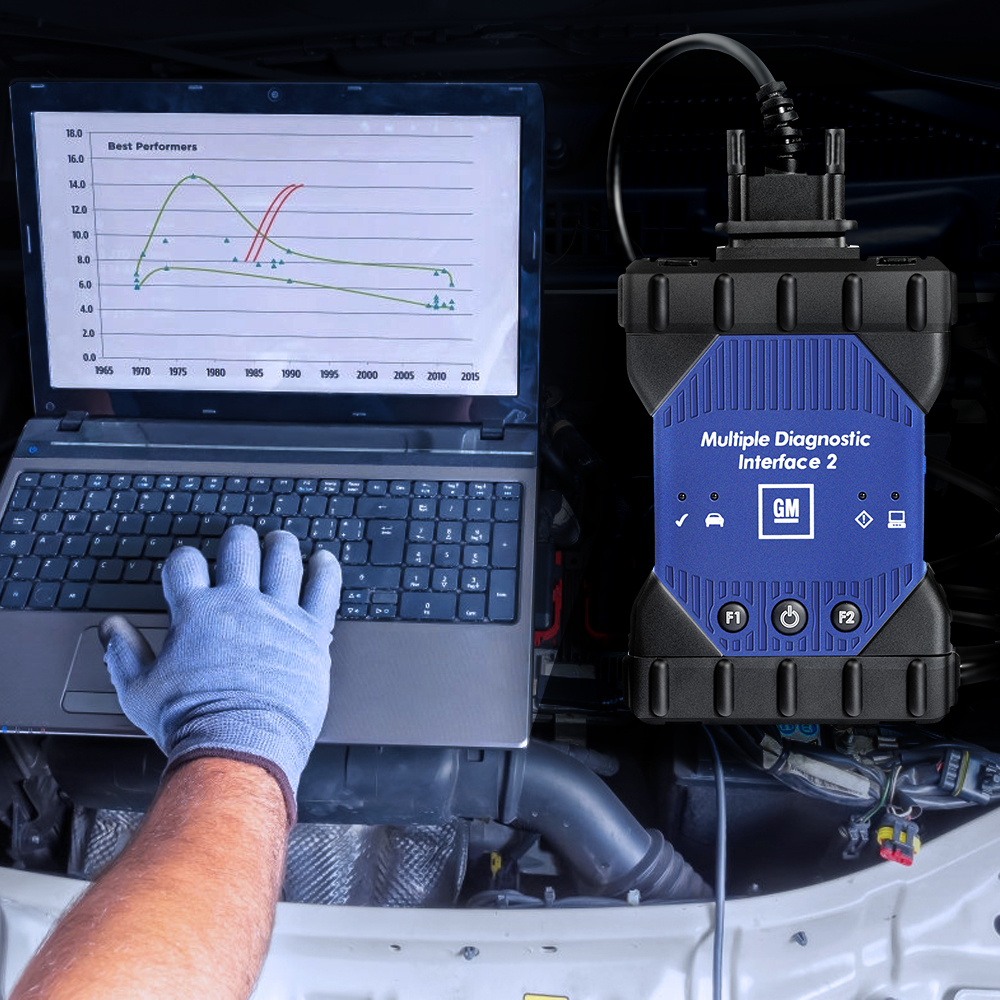 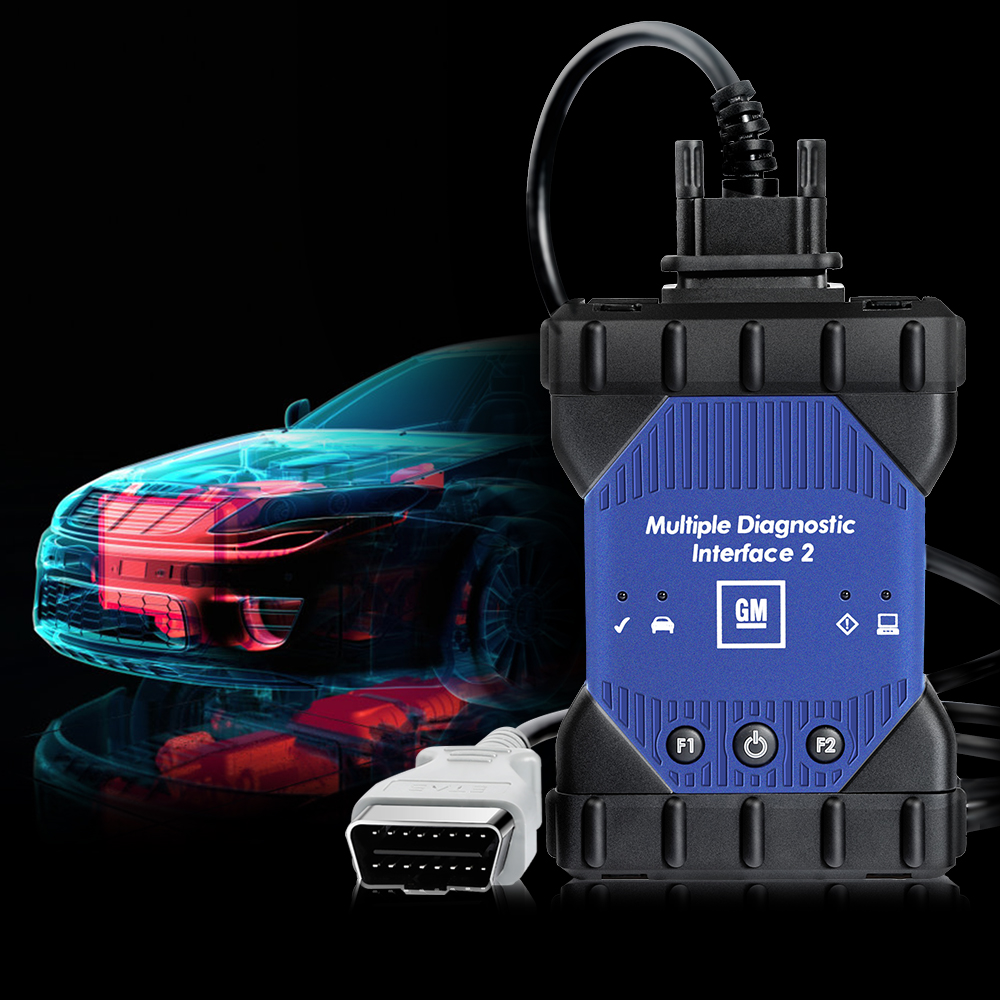 GM MDI 2 and GDS Background
MDI is an interface between the vehicle DLC and a PC (by wired USB, wired Ethernet, wireless Ethernet ) and TIS2web.
Can be Used for SPS programming on existing and future SGM vehicles
Required for diagnostics on new SGM Global A Electrical Architecture Vehicles
Used with TIS2Web, GM Global Diagnostics System (GDS), SPS and MDI Manager Software
Allows for GDS diagnostic
GM Multiple Diagnostic Interface (MDI)
All current and most legacy vehicle protocols: UART, KW2000, CLASS2, GM LAN, etc.
Needed for Global A architechture vehicles
Supports Service Programming System (SPS)
Passthrough progrmming on past model and Global A vehicles
Supports PC-Based diagnostics with rollout of the Global Diagnositc System (GDS) application
Includes Flight Recorder Mode
What protocols does the GM MDI 2 support?
For immediate use — At present, vehicles have two buses on the 16 pin connector
(high speed and low speed GMLAN). The GM MDI communicates using all of the existing GM protocols, the same as the GM Tech2:
- UART
- Class 2
- KWP2000
- GMLAN (CAN)
Beginning with the 2008 model year vehicles, Pass-Thru will be the only programming method available. (Remote will continue to be available for previous vehicle

When you want to test After 2010 year GM car, you can use the GDS software to test it,run fast and stable 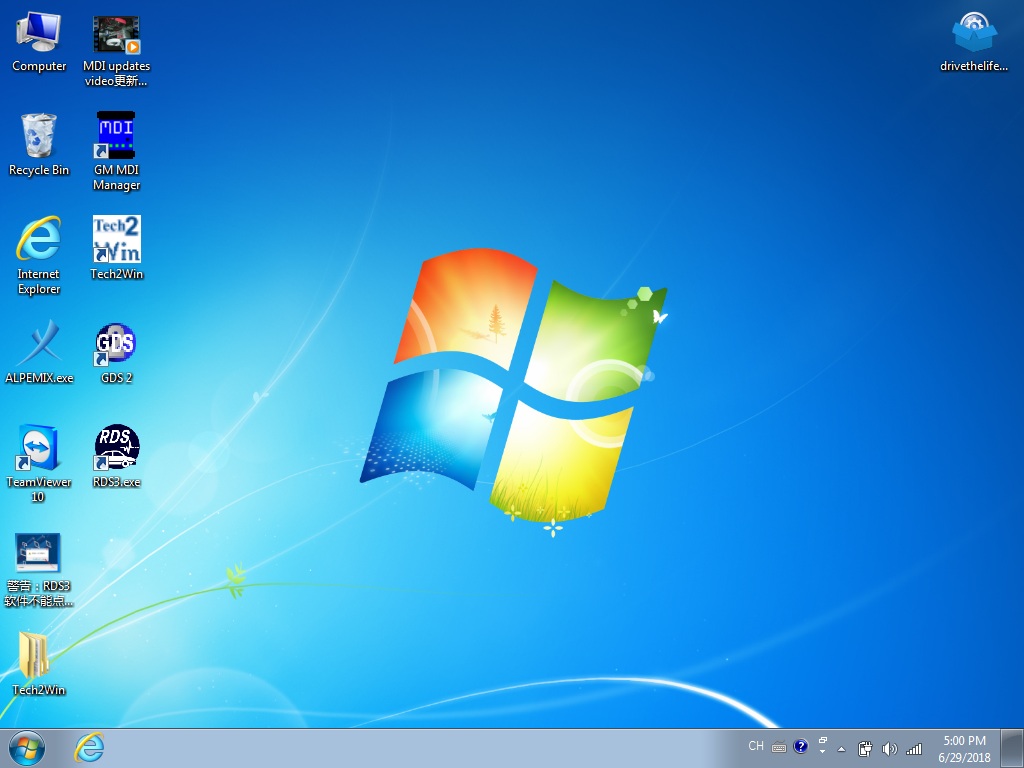 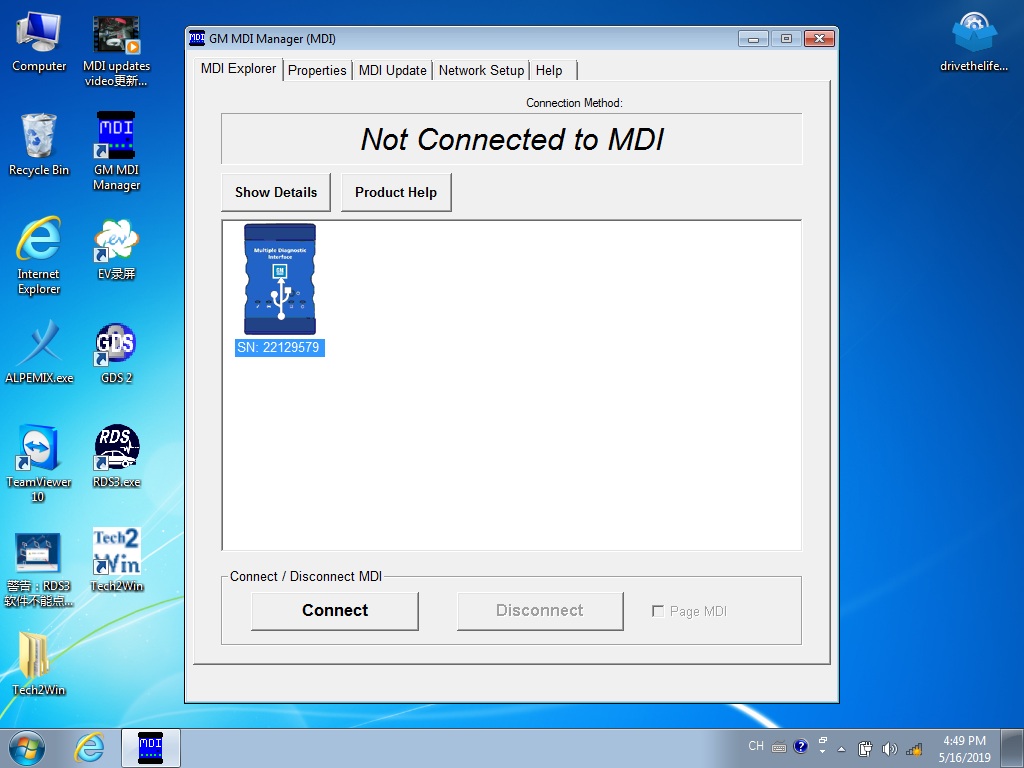 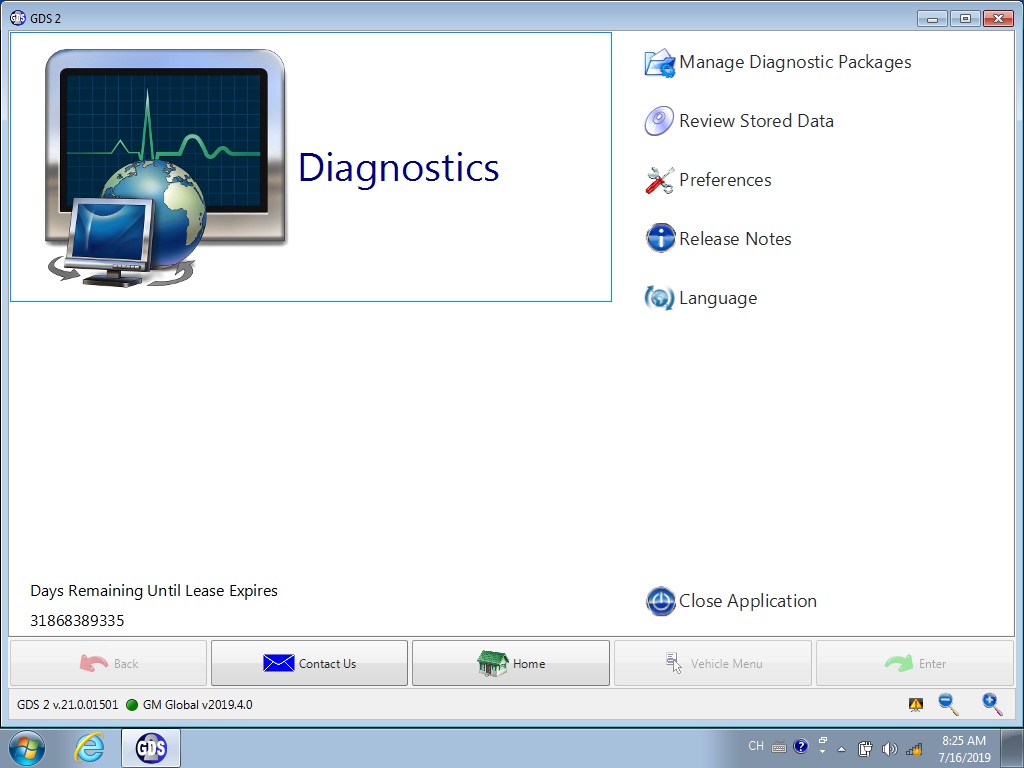 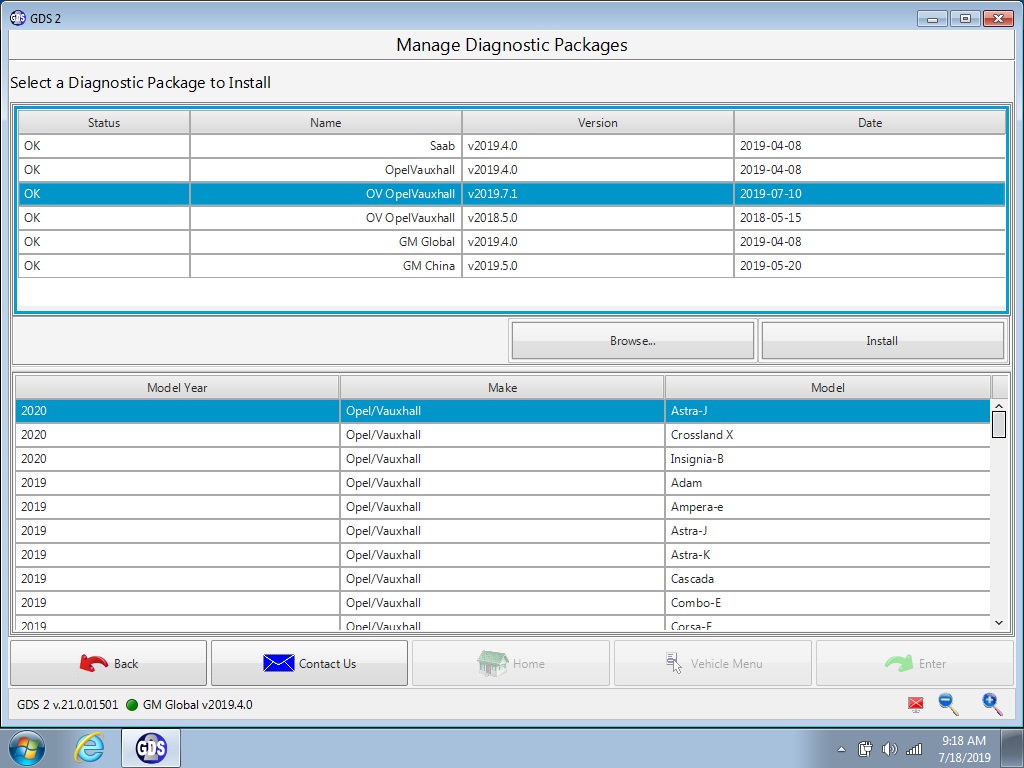 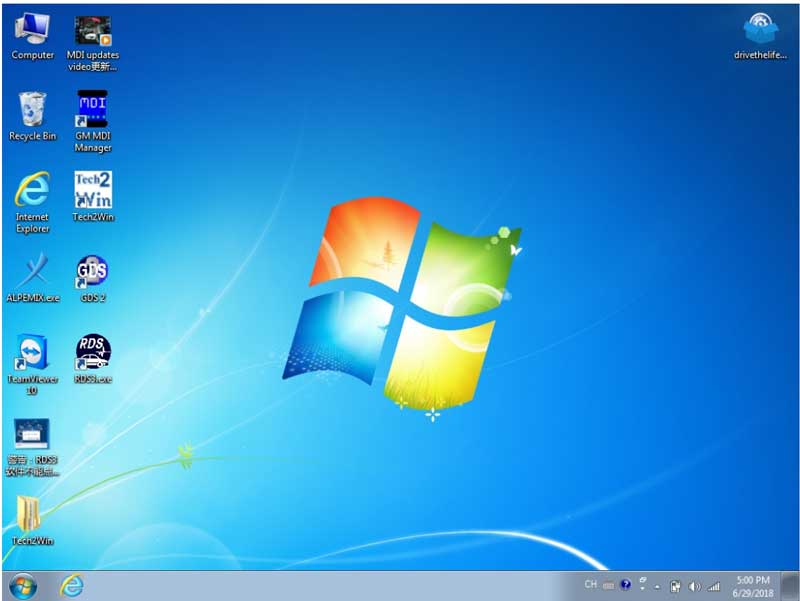 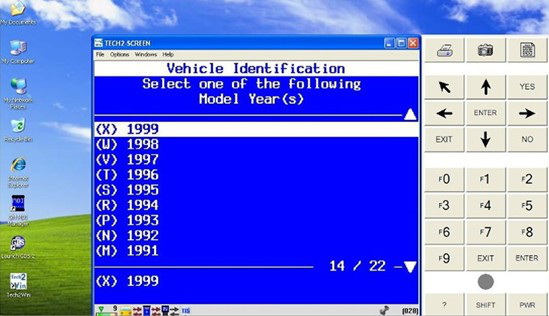 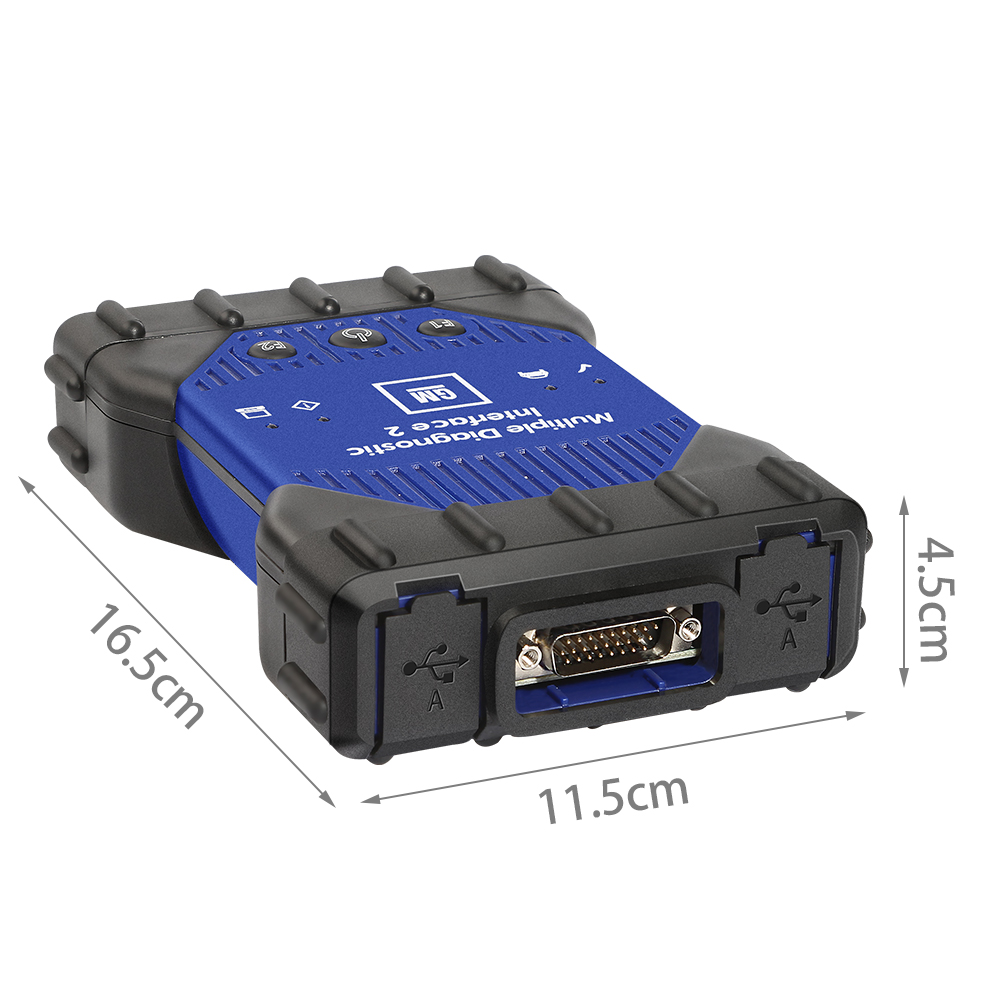 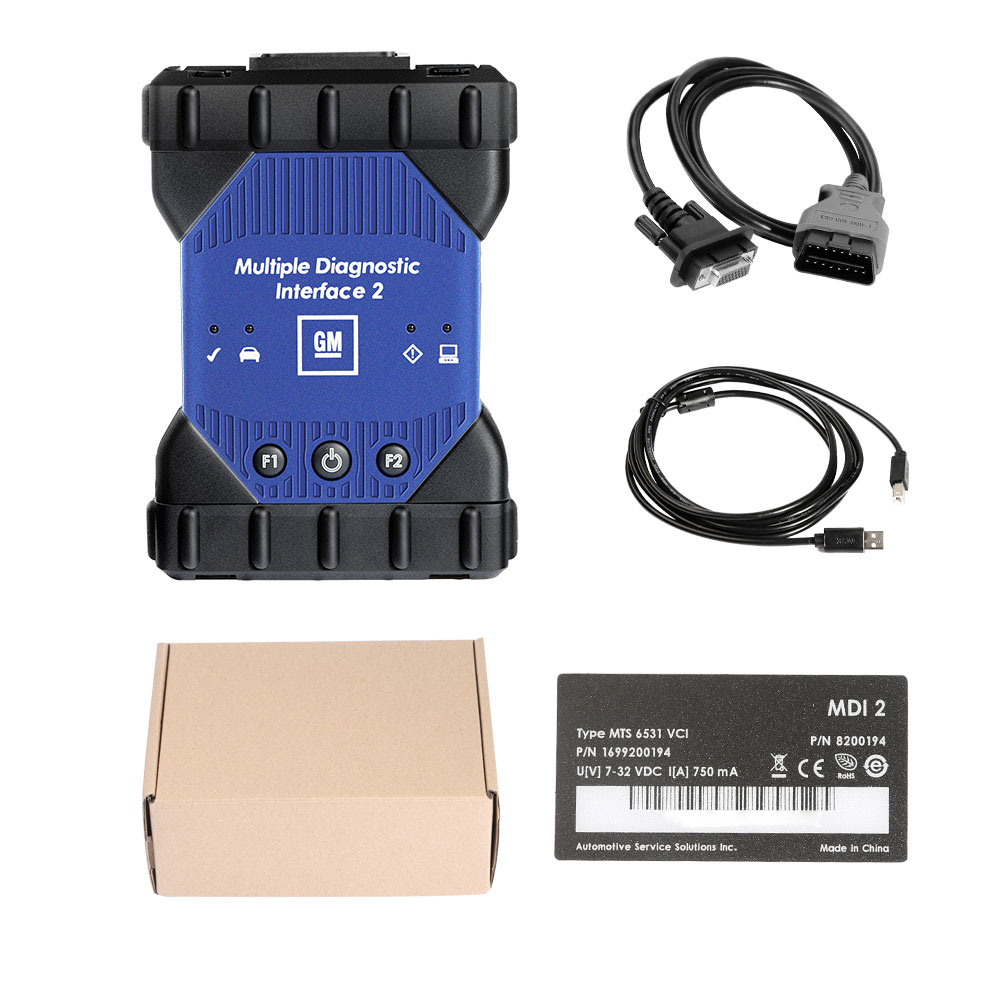 How to make purchase on obd2eshop?